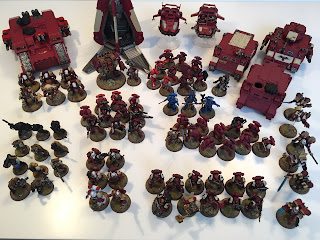 This was an extremely fun themed army to develop and nurture over the years. The theme was dawn of war, in that (with a bit of wiggle room) there are no units in the army that you wouldn't find in the dawn of war games. By wiggle room I mean that I have a unit of vanguard veterans which, while they don't appear in the game, seem to represent assault marines well. Things such as centurions and flyers however are not to be found in the  army. The other aspect to the army is that  I have tried to represent all of the characters found in the games with converted models.

The Gladius core choice is, of course,  a demi company. In this case the composition is 3 tactical squads each led by a character from the games, namely tarkus, aramus (force commander) and an as of yet unarmed chap representing the misc sergeant from the original game. There are a pair of rhinos and a drop pod to aid them or others in getting around. The fast attack slot is a land speeder and the heavy slot a devastator squad under the command of avitus. There is an apothecary model for completions sake but the veterans I have are usually fielded in the 1st company task force rather than as a command squad.

In terms of characters that can lead the company, there are 5 to choose from. The generic plastic chaplain is a decent rendition of chaplain mikaelus. The other options are all captains or chapter masters of one sort or another. Captain apollo diomedes is a jump pack captain, captain Gabriel angelos is a relic blade captain and finally chapter master angelos comes in his power armour or terminator armour forms wielding a thunder hammer. Last addition to the battle company is none other than the venerable dreadnought Davian Thule.


For the 1st company task force there are 3 squads. A unit of terminators led by Tarkus in terminator armour is the first, a small sternguard unit led by The Ancient is the second and lastly a small Vanguard squad led by Thaddeus. A Land raider is in support. Random fact: aside from Angelos the only other character to get a duplication is Tarkus in his original, terminator and ancient guises. (and he may even have a fourth if the original DoW Sergeant was meant to be him also) 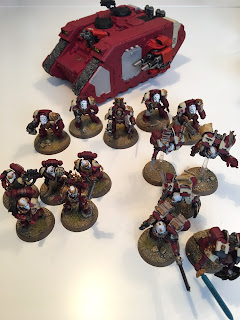 The combined arms detachment is led by either a techmarine (martellus) who is converted from an older techmarine model or telion (Cyrus) the converted scout sergeant. The troops slots, as with most of my marine armies, are made up of a couple of scouts squads, in this case with sniper rifles. Fast attack wise there is a sole forgeworld contribution in the form of a landspeeder tempest. This is not the genuine model and I actually a conversion I made some time ago. Heavy support is occupied by a predator with a scratchbuilt front armour plate. I also have a whirlwind turret option as an alternative loadout.

Well that about wraps things up for the Blood Ravens. They need work to get the other half of the army up to tabletop standards but in terms of the size of the army I call it a day. Very pleased with such a fluff-inspired themed army that, while some elements are pretty plain (the mono-pose tacticals for example) other elements such as the characters conversions and unique look of the army make it pleasure to see on the table. Cheers.