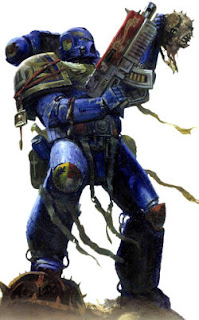 With the new codex release only a week and a half away, now seems like a perfect time to relay some thoughts about what may be on the horizon. Through the joy of leaks and weekly release schedules we already pretty much know what is coming model-wise, which I'll briefly touch upon, but what we have very little info on is what is coming rules-wise.

Models really started rolling out with the release of the space marine command tanks exclusive to warhammer world. I personally hate the idea of these exclusives which, while a relative pain for people like myself to get ahold of (an hour away and no discounts) are near impossible for gamers globally to get without paying ridiculous prices to ebay scalpers - anyone who wants one let me know and they can have it for cost plus shipping next time I go. The assault squad is a relatively mediocre release which, while an improvement over the previous incarnation, brings relatively little to the range.

Now things start to get interesting. The SM transfer sheets are amazing. Pricey, but worth it for all the transfers you get, especially the Dark Angel ones which (coming from someone who has commission painted the sacred standards) will make life a lot simpler! There's also a new plastic Librarian, who seems like a reinvention of the wheel for the most part, but still OK. (won't mention the DA Chaplain here). Then on to the other goodies. The devastator squad looks amazing, with a rumoured 2 of each weapon (including the new grav cannon) and redesigned old school legs, these are sure to be a hit with players old and new. Last but not least, the upgrade sprues, which are a long-time awaited and most-welcome addition to the range. My only hope is that they continue this trend to encompass the other first founding chapters (and Templars) before applying the same to Chaos Marines.

I'll cover the models in more detail when the actual release comes about, but suffice to say a mega-Marine fan like myself will be hard-pushed to resist the temptations on offer. The rest of the release seems like pretty standard fare - regular codex (bigger than the last but same price), 7 limited editions (same as last time) plus datacards, which will include battle doctrines or something like that - apparantly these will be in addition to chapter tactics which makes things interesting.

So what would I like to see from a new codex? Well, there are several things TBH that I think need changing and several that I would hate to change. I'll talk about the latter first. There were rumours of honour guard disappearing, which IMO would be a bitter blow to the codex as I use them in several armies and think they have a particular place.  They also do actually have models, albeit for either ultramarines or red scorpions. The next thing is Templars, which are also rumoured to be disappearing. Double-edged sword really - they were shoehorned in to the last codex and just about fit in. They really need their own book though IMO to make them shine and if indeed they are gone from the book they will either be getting their own book immediately after (still a couple of weeks for them and Templars before Fantasy lands) or they will have gone the way of the Dodo. Former is infinitely preferable to the latter.

Now onto change, and change is often for the better. Some units need to be improved, such as assault squads, and I think that rules changes rather than wargear or points tweaking would work better here. Centurion spam in drop pods needs addressing, but not without giving marines the ability to form competitive lists. Chapter tactics worked really well last time around and I hope they continue to build on this to make Chapters even more unique. Specific formations / detachments will also aid this. I would also hope (but hope is fading) to finally see my beloved Iron Hands get the same rights as the other first founding Chapters and get a special Character, at the very least an Iron Father. They made a mockery of the fluff last time around and the fact we've seen no models at this late stage makes it a foregone conclusion really but one can always hope.

Lords of war (thinking Calgar, Kantor and Lysander) will also be good, but in addition I'd be interested to see if they add in generic Chapter Masters as LOW to stop the Chapter Master spam tactics. Don't get me wrong - I think the addition of the Chapter Master ruleset last time around was a good thing, but 2 running round at the same time goes against fluff completely. Also, we need to work out how to build whitescar lists if HQ bikes no longer make them troops - presumably with some sort of formation / detachment? A specific addition I personally hope for is a small clause in the armoury section for heavy flamers stating 'may only be taken by sternguard veterans or models with access to the heavy weapons list and Salamanders Chapter tactics' - why blood Angels get them and not sallies baffles me.

That's about all the random musing I can muster for now. Suffice to say I'm highly anticipating the direction they take and hope it's somewhat reminiscent of the Eldar Craftworld codex, just without the bittersweet overpowered units. We shall know in 10 days or less. Cheers.
Posted by Jimbo at 17:44