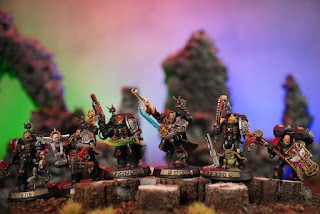 Following on from my hobby update I wanted to share some pictures of a project that took a fair chunk of my hobby time over the Summer. I'm a fan of Tabletop Tactics having started out watching their youtube channel and later signing up for their subscription service. Links to both below for those who haven't come across them. The quality of the production and entertainment value is amongst the best in my opinion when it comes to Warhammer battle reports, tactica and articles. Definitely worth a look if you've never watched.

Anyway, it's been a while since I've worked on a one-off conversion / painting project and as soon as this idea flashed through my mind I realised I needed to see it through to completion. It was inspired by a t-shirt available on their shop, which has caricatures of the original TT cast as RT-era marines. I love the t-shirt and decided what would be a great project would be to make a deathwatch kill-team in their honour, representing the 6 current members of the team as marines. I contacted the studio and proceeded with their blessing. 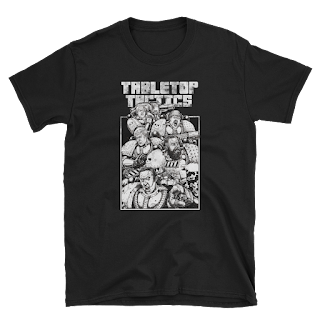 All in all the project took a few months and was based on a 5-man veteran kill team with an artemis model. Unifying features incuded the bases, for which I used industrial floor plasticard leftover from other projects as it resembled the filming studio floor. I also added name plaques for each member through versatile terrain (link below) which were able to be customised. I tried to add a squad marking in the form of TTs logo of two dice on the knee-pad. This was customised for each member and is detailed below. The faces were loosely based on the staff members themselves. 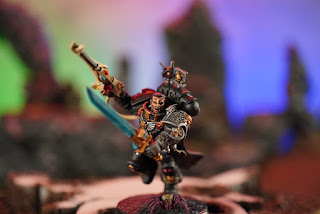 Head honcho at the studio and based upon the Artemis model, Spider was customised with a grey knight falchion (his SM faction of choice) and some xenos tech in the form of a shuriken catapult, given his love of all things aeldari. What can't be seen in the photo is that the DW logo is modified to resemble the TT logo. His chapter shouder pad is a popgoesthemonkey shapeways black dragon logo from their deathwatch set (as below) painted to resemble Roku, the mascot dragon. Speaking of which, the D.R.A.G.O.N and S.A.C.R.E.D tactical teachings from their site are emblazoned on the shin parchment. Base decoration is a, well, spider, painted in the colours of the studio Tyranid hive fleet. Lastly, his dice number is naturally a double 6 given his uncanny ability to roll 6s in battle reports. 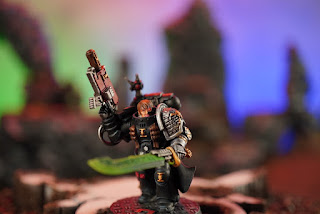 The chef has a raven guard primaris head to give him his iconic silken hair and comes equipped with a necron phase blade (given his passion for the croissant-bots) and a combi-melta seeing as melta is so hot right now. His chapter pad is loosely based on his Ashen Huntsmen white-scar themed marine army and also grants the dice number of 5 to his knee pad, seeing as they are the 5th legion. 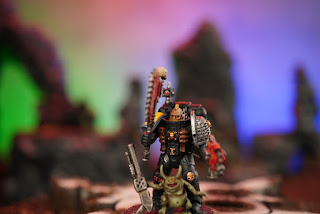 The studios resident Aussie if depicted here as a space-wolf chapter brother, sporting a head from the wolf-scouts upgrade part of the pack set. He packs not only a deathwatch bolter, but a CSM terminator chainaxe, emblazoned with nordic runes spelling out both bane (his wolf-lord character on the tabletop) and kharn, everyones favourite chain-axe wielding psychopath. His dice number is 7, seeing as it is the blessed number, and on his base is none other than Grotty, the studio mascot Nurgling, packing a shotgun ;for close encounters'. 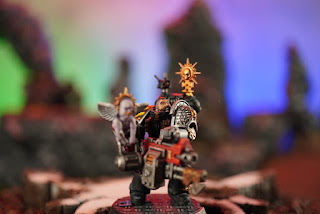 The bearded one sports a head from the series 2 space marine heroes set in an attempt to do his facial hair justice. The chapter badge is a silver skulls one in iron warriors colours complete with chevrons - not quite heretical enough so as to still be acceptable to the deathwatch. He is packing an infernus heavy bolter and is accompanied by non other than the bone-cherub carrying a melta-bomb to the fray. (what a team!) This completes the holy trinity of bolter/flame/melta that the Adeptus Sororitas so covet, hence the gift of the order of our Martyred lady icon awarded to him. His dice number is double 1..... the reasons for this will become apparent if you watch any of the battle reports. 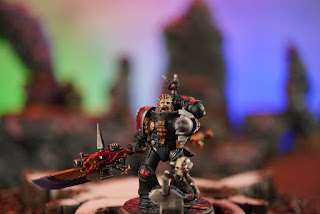 Accompanied by a servo skull carrying ammo, the Stig carries a Guardian spear into battle reflecting his love of the Custodes on the tabletop. His other go-to army, the ad-mech of Stygies VIII not only grants is a bionic left arm, but also an ad-mech shoulder pad and the dice number of 8. The head is from the space wolf thunderwolf kit. 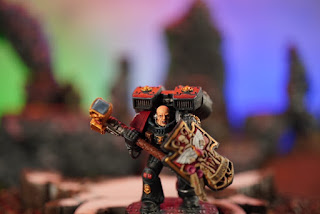 Last but not least, the behind the scene one-man painting army that is Sanga is represented by a jump-pack equipped brother sporting the classic Blood Angel smash-captain combo of thunder hammer and storm shield. The hammer is adapted from the deathwatch and death company sets and the shield from the Space Hulk terminator kit. I can't honestly say which space marine kit the head came from and naturally, being a huge blood angel fan, a BA shoulder pad is present on the right arm. His dice number is 9 for the Blood Angel legion and one last little feature is a shackle and chain on the leg, in order to keep him chained to the painting desk.....

That's the lot. A thoroughly enjoyable little project which, once complete, was gifted to the TT studio team. Big thank you to Lawrence for supplying the photos and giving me free-reign to use them and also to his lovely wife Rachael for her correspondence throughout the project. I hope you have enjoyed the tour through the project and please give the above links a look in. Cheers.