Well they're finally assembled and ready for battle. Irony is it's taken me so long to get them to this stage that they can no longer be simply ported from 30k to 40k as the rules are now different. More on that later, but anyone who's followed this army project of mine before will know that it has been a labour of love that first started out as an idea for a small chaos marine force when I first read the Horus Heresy books, some 8 years ago now I estimate. I Originally planned to convert them to look like the 'false gods' marines from the cover art, but by the time I had even thought about making some progress on that front the HH range had started to trickle out. Suddenly I could buy actual models for them and they had actual rules as well.

They stayed in a limbo stage for a long time, gaining plastic reinforcements when the Calth and Prospero books came out. Finally, in Summer of 2017 I made one last push to get them all assembled and sprayed / based. Now they are there as can be seen from the pictures below. I haven't played a game with them yet and am tempted to dip my toes into HH once the new ruleset lands. I've added a Primus Medicae and the quad bolter rapiers (not pictured) and have a few wishlist items to add one day, namely a Proteus, some Justerein and a Super heavy. For now though they are done and Loken even got a starring role in a WD last year when I took him to a GW event. 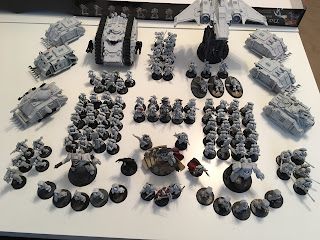 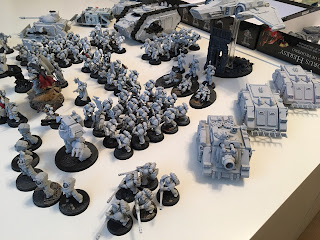 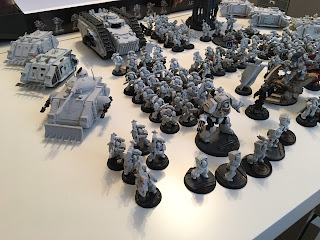 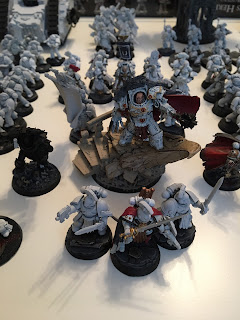