A while back I wrote/outlined a 3 part fanfiction chronicling the life of an Astartes of the Sons of Orar Chapter. I wrote about 1/3 of the first volume and outlined the rest but never got around to refining or finishing it. At that time I decided to paint a test piece for the Sons of Orar, the idea being if I ever wanted to one day make another Space Marine army that these chaps would have first pick and I would base the army around the characters in the book. I even did a test piece for the captain of the 5th company as seen below. 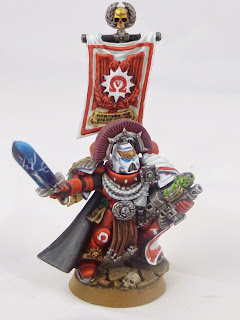 With the advent of Primaris marines I had broadly 2 choices: incorporate units into existing armies or create a new solely Primaris army. I have after much deliberation opted for the latter. This, however, has meant two things. Firstly, it is incompatible with the story and characters from my fanfiction. Secondly, my test piece (who I was pretty proud of) is invalid within the confines of a purely Primaris army. This aside, it seemed the better choice and over the past 4 years I have steadily built up a large sons of orar army.

As it stands all the bases are done and all the models assembled and basecoated. However, I have set myself the target over the next 3-4 years (obviously adjusted for new releases) of getting all the models in the army fully painted. This is a hefty commitment and I am planning on doing this as a background ongoing project (so I have a monthly target) while other projects take the fore on a monthly basis. The first year target is 25% of the army and 6 months in we are on track as below.