Luna wolves near completion and start of 72 hour hobbby/blogathon.

This post marks an end to a very longstanding project and a beginning to a very short one. Firstly, I am almost done fighting the ‘long war’ that is my Luna wolves project. This one has dragged out for a long long time for various reasons. I thought it would be nostalgic to recap the project from its inception. 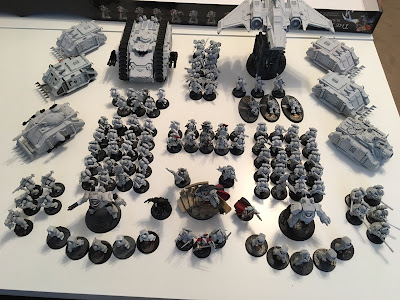 I first decided I wanted to make a Luna wolves army when I had been back in the hobby for a couple of years, circa 2008. Main reason for this was that I was starting to branch out into other armies other than blood angels and orks and had just finished reading my first Horus heresy novel: Horus rising. I loved the idea of portraying the Luna wolves prior to the fall with loken’s company being the one of choice.

At that time the best way to portray them seemed to be using a counts as chaos army and with second edition era vehicles to look the part. As for the look of the marines I decided to try  and go for a look that would be consistent with the cover of False gods, meaning mk7 legs, the cross strap and vent chest pieces, studded shoulder pads made with tiny beads and some custom green stuff heads. I even toyed with the idea of using an old school robot as a chaos dreadnought. 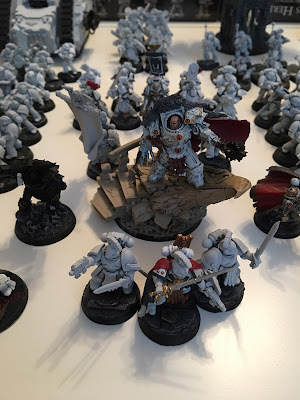 Suffice to say this idea lurked in the background due to the challenge it represented; that is until the heresy started to arrive. Now suddenly the very models I wanted had started to appear. I got ahold of a few of the forgeworld infantry kits and started to incorporate them. Later followed things such as characters, weapon kits and a contemptor dreadnought. I kept the old rhinos tho, for cost reasons and nostalgia.

Somewhere in there I picked up the first Horus heresy forgeworld book which gave me a new structure to work with for the army. The Horus heresy gw games (bop/bac) gave me an infantry boost, second contemptor and plenty of bits. The addition of some rapiers, a spartan and xiphon marked the army as complete. Now everything just needed final assembling, most notably the marines I still had who were going by my original design and needing green stuff cast custom helms. 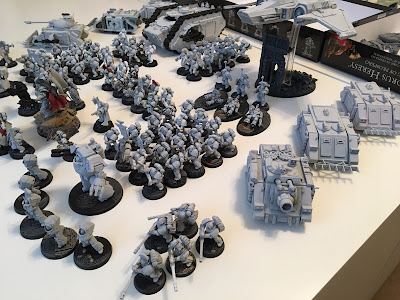 This poor project kept getting pushed to the bottom of the pile but now, finally, we have almost done with things. All the bases have been sorted in 32mm to represent a city under siege during compliance. Everything has been base sprayed in corax white and is ready to go, save for a couple of rapiers which I still need to sort out (can see their gunners on the bases). Sadly, so long as 30k and 40k have a different gaming system I will no longer be able to port them directly into 40k, but could proxy most things as chaos marines once again. Very happy / relieved to have finally got it sorted. The army is only lacking a primus medicae (and I would love justerein one day) but other than that stands as: 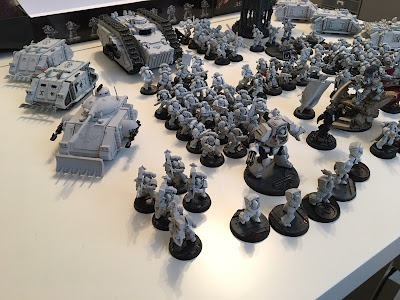 This brings me on to the next, brief project, which is only slightly smaller in scale. I'm in the unique position of having a few days off for my birthday with little on the cards for those days. You may have seen my fledgling primaris army elsewhere on this blog. My wife has kindly bought me the other half of that army and so I thought it would be fun to do a ‘live blog’ of sorts over those few days. This effectively means that tomorrow, Monday and Tuesday I'll be posting a brief progress report to show how far I've got.

The aim is to assemble 14 intercessors, 1 captain, 1 repulsor, 15 helblasters and 6 inceptors, as well as spraying them red/white and putting them on finished bases. This should be possible in the space of that time frame with some discipline and the only thing that will slow me down is some of the conversion work I will need to do with weapons.  Here's the army as it stands to date; tomorrow we'll take a look at the new additions and the task ahead. Nothing to it but to do it! Cheers. 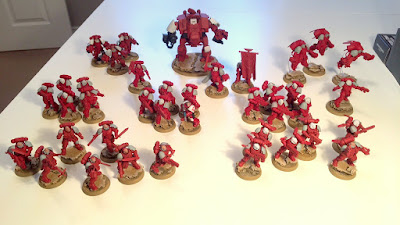