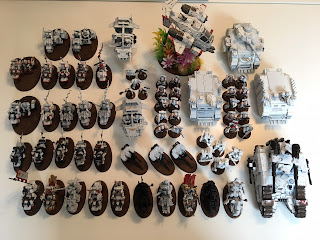 Hi all. With my space marine projects all finally coming together I have decided to post over the next few months showcasing each army, what the theme of said army is and what stage it is at. To put things into perspective, my overall aim was to get each army to a stage where it is assa bled, based, basecoated and with a full complement of models. This would enable me to pick up and either game with or do further painting work on them at any time and allow me to move onto other armies that are not loyalist space marines in terms of hobby and assembly projects.

The army here is a whitescars one which, unsurprisingly, is mostly themed around bikes. As with all my marine armies one of the goals was to get them all onto unified and up to date bases. This has been achieved for the scars as they are now on 32mm (except the scouts) and oval bike bases. Interestingly, the carnifex sized base was a good fit for attack bikes. The basing is basic with simple gw texture paints sprayed over with mournfang brown and dry brushed. Once the models themselves approach completion I will add the plastic aquarium plants to the base for more variety and decoration.

Back to the army itself, the core is a scar blade strike force with a combined arms detachment in support. Most of my marine armies have been redesigned to work like this, but the scars are unique in that the marine specific detachment contains bikes and scouts with the power armour being part of the cad. Reason for this is that I didn't want to include devastators in the army as I don't feel they fit whitescars very well, like terminators and dreadnoughts.

The hunting force is composed of a converted khan on moondrakkan with the other elements being  a bike command squad, 2 units of bikes, an attack bike squad and scout bike squad. I used some wfb parts for the flags and the whitescar upgrade models to represent the sergeants. In practice, the bike squad are supposed to be for anti horde duties being loaded out with flamers and heavy bolters, while the attack bike squad have multi melta for anti tank. The scout bike sergeant is partly converted with a space wolf scout head and a combi melta. The command squad has a few conversions built it to it including a removable banner from fantasy. The latest addition is a modified deathwatch overkill biker as the company champion. Hq options are for a bike captain and / or chaplain, which can obviously swap in with khan if needed as part of the hunting force. The chaplain is simply the metal chaplain with a few extra bits and the captain simply the upgrade set captain. 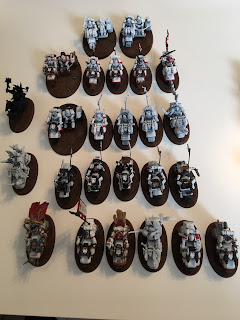 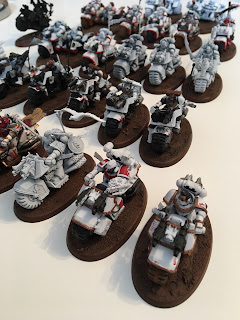 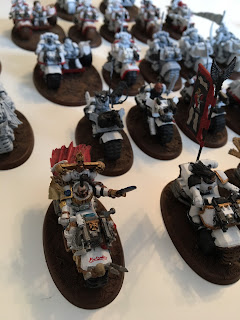 The auxiliary formation is comprised of a squad or scouts in a land speeder storm with accompanying land speeder escort. Nothing particularly remarkable about them but i like the formation as an auxiliary as the scouts are good for objective grabbing. 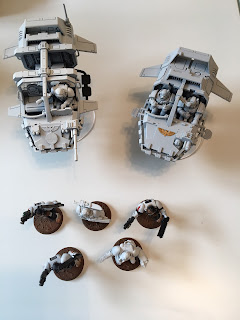 We then move onto the combined arms detachment which has a choice of either a bike librarian or techmarine in the hq slot. The librarian is an old second edition model cut in half and mounted onto a bike. The techmarine is a more complex conversion from one of the fw bikers and involves techmarine, stormraven, command upgrade frame and admech parts. Troops wise there are 2 units of tactical marines both in rhinos. Most of them are stock models with a few interesting conversions in there. For elites there is a unit of vanguard veterans with jump packs, all of which have been customized to fit with the rest of the army. Fast attack contains a stormtalon. This was actually the first stormtalon I assembled and painted and was fully painted for a tournament in which I took one unit for each of the first founding marine chapters. On it you can see heavy weathering and the aforementioned aquarium plants. 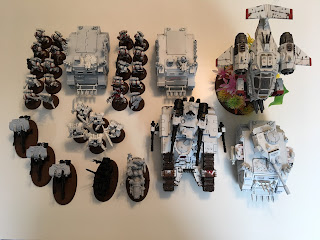 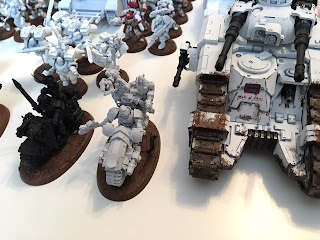 Lastly, heavy support contains a unit of tarantulas, a predator and a sicaran tank. The tarantulas were part of a space crusade lot on eBay and, with some conversion to accommodate an auspex where the original marine gunner would have stood, they were salvaged. At first I hesitated to add such a static unit to a mobile army, but when I thought about it I liked the notion that the scars would herd their prey towards a trap in the form of a deepstruck or concealed tarantula battery. The predator is there for some much needed medium range and strength firepower and the aptly named sicaran 'wrath of khan' adds even more long range firepower and anti air. 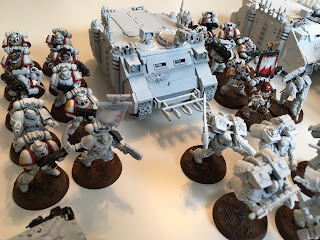 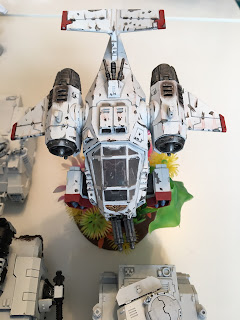 That about wraps up my brief army tour. As with each army, I can tailor the list to the points being played and can complete the paint jobs on individual units as a when. I will post a duplicate of what's here on the army info tab which will serve as a permanent guide to the army and also aim to do the same for each other army in turn. Thanks for reading
Posted by Jimbo at 09:13