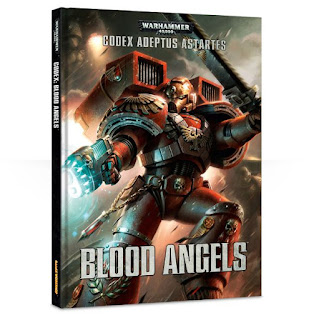 Oh GW, why doth thou tempt us so? Only a week ago the prospect of global FAQs/Erratas were dangled in front of us, which many of us thought would bring balance to the force and make those  prematurely outdated Astartes Codexes (Blood Angels / Space Wolves / Grey Knights) on par with the other updated chapters. But sadly no. Yet again, ball dropped and player base neglected. Well, it doesn't take a genius to come up with the obvious errata that they seemingly can't put together themselves and so I put myself to task with it. Below you will find a (hopefully) comprehensive errata for the latest Blood Angel codex bringing it in line with the Dark Angel / Space Marine codexes. This is NOT an FAQ and makes no attempt to bring the Shield of Baal stuff (yet) or detachments / formations up to speed. It's simply text to cut and paste rather than a downloadable document. Anything I've missed please let me know and I will update. Cheers.

p76 Vanguard veteran squad:
·     Amend heroic intervention rule: A unit with this special rule can re-roll one or both dice when determining its charge range. Furthermore, a unit with this special rule ignores the penalty for disordered charges.
·         Remove option for any model to take items from the melee weapons list.
o   Add the following options to the 'Any model may replace its bolt pistol and / or chainsword with one of the following' list:
§  Power weapon or lightning claw - 5 points per model.
§  Power fist - 15 points per model.
§  Thunder hammer - 20 points per model.

p90 Predator:
·         May include two additional Predators for 75 points per model.
·         Add the Killshot special rule:
o   Whilst this unit includes three Baal Predators, all Predators in the unit have the monster hunter and tank hunter special rules.

p91 Vindicator:
·         Add the linebreaker bombardment rule:
o   If this unit contain three vindicators that can all fire their demolisher cannons, the squadron can fire a single linebreaker bombardment instead of firing normally. To do so, nominate one model in the squadron as the firer; the firer's demolisher cannon changes its type from large blast to apocalyptic blast and gains the ignores cover special rule.

p92 Whirlwind:
·         Add the suppressive bombardment rule:
o   Whilst this unit includes three whirlwinds, each models whirlwind multiple missile launcher has the pinning and shred special rules (regardless of which missile type it fires).


Grav amp - when rolling to wound with a grav-weapon, or to determine its effects on a vehicle, the bearer can re-roll the result.

Armorium cherub - One use only. One model in a unit equipped with an armorium cherub can re-roll all failed to hit rolls in one shooting phase.
-------------------------------------------------
Now, there are a few personal choices in there such as changing the command squad structure, terminator option for Sanguinary Priests and the wording of the heroic intervention rules for Vanguard, but I stand by them all being changes for the better. I didn't add in Land speeder storms as Dark Angels didn't get them either. Hope this is useful for people to cut and paste / print out. My next post will be in the new year most likely and will be about all things Luna Wolves. Cheers.
Posted by Jimbo at 16:39