Once I'd skimmed the codex I immediately realised I was missing a vital part for my planned models - plasma talons. I intended to convert several dark vengeance bikes to black knights, but hadn't counted on plasma talons being a standard weapon rather than an upgrade. Therefore, I grabbed the bits box and got planning how to convert some. As promised, I've knocked up a crude but hopefully useful tutorial for how to make plasma talons. But that's not all. The tutorial not only covers plasma gun to talon conversion, but also plasma pistol to talon conversion as I appreciate most people have more of these laying around spare. That's not all - I also included a tutorial for how to turn scout grenade launchers into grenade launchers for black knights also. In advance I will say that the genuine parts look better, yet the kit is 3 times that of dark vengeance bikers on ebay and I doubt online parts stores will have them in stock regularly due to their popularity. Without further ado, here we go.

Firstly here's a size comparison between the gun, talon and pistol. The talon is clearly somewhere between the two which makes sense given its profile. The plasma core jutting from the base of the talon is difficult to replicate so from the start I decided not to try for a carbon copy of the talon, merely an approximation / different pattern of talon. Also, to see how it would look when finished I took a reference pic of the talons assembled. 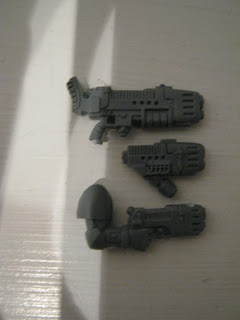 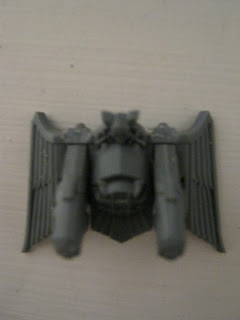 Remove the pistol from the hand then cut the rear of the pistol off behind the coils. Then remove the coil and everything from below the casing 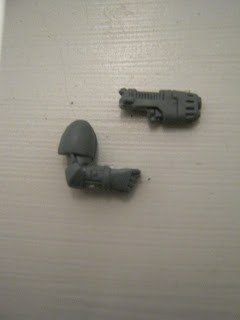 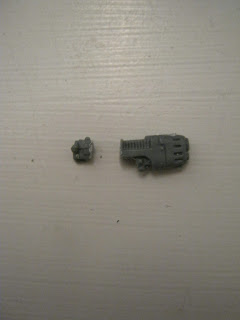 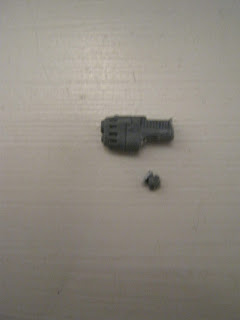 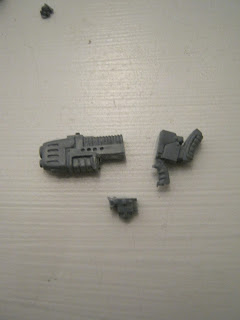 For the gun, remove the rear section behind the stock then the core from behind the grip as pictured. remove a second section of the coils about halfway between the vent holes and the cut already made. Lastly, make three small cuts as indicated in red, removing part of the grip, another part at a 45 degree angle and a section beneath the vents. This will allow it to fit the fairing snugly. 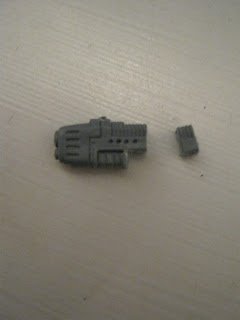 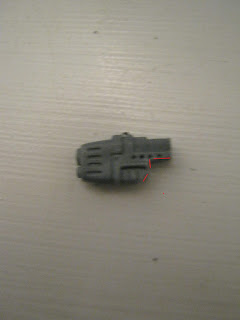 
The dark vengeance fairing is quite different to that found in the ravenwing command set and so must be prepared. Before assembling the bike, trim the bolter off as shown in the picture below. There is no need to modify the end of the bolter attached to the wing fairing, only the part directly attached to the bike. I removed the bolter so that there was a small flat surface on the top, a flat section at 45 degrees to this that merged with the flat section which would lie either side of the eagle tail. I also left the bolter ammo feed in place so as to avoid having to fill any gaps with green stuff. Remove it if you want to but it works well to hide any flaws in the join between the plasma gun/pistol (especially the pistol) and in fluff terms would serve to protect the plasma coils. 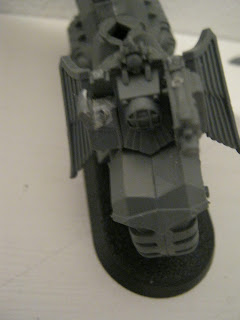 To expand upon the above as the pics aren't very clear, here is a diagram to help explain. In cross-section, you should have something that looks like this, where 1 is the bolter stub, 2 is the inset where you removed the bolter from the attachment points for the fairing to the bike, and 3 (faint outline) represents the retained bolter ammo feed. A represents the cut plasma gun, which should fit nicely onto the fairing as it is depicted here. B is an alternative way of cutting the plasma gun, which will require much more careful cutting of the angle as a mistake will result in the plasma gun pointing up or down too much. Just attaching it by the two smaller points (A) allows for easier correction and the gap will be hidden behind the bolter feed anyway. It should also be noted that point 2 can be cut to be flush with the angle of the bike fairing if you wish - it will all be hidden beneath the plasma gun anyway, just the way I've done it here makes for a much easier cut when removing the bolter. 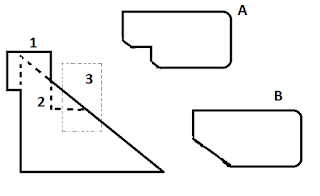 Here are the finished versions, plasma gun version on the left, plasma pistol version on the right. (both in the bottom of the picture) The gun version is similar in size to the actual talon as seen in the first picture, whereas the pistol is a lot smaller. (but usually more abundant in bits trays) The rear of the bolter is used to attach the plasma gun/pistol to, though if you wish you can trim this and add one of the plasma core pieces cut off earlier to make it look more like the talon. 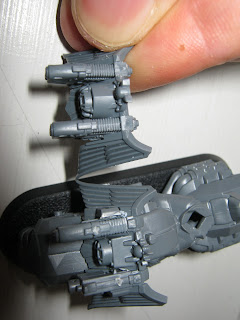 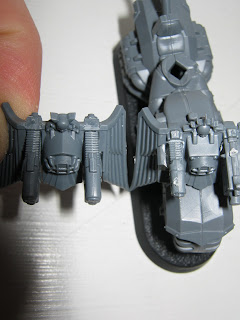 
following the line of the bike fairing, approximately 45 degrees, cut the bolters off the bike halve (before assembly ideally) completely. Trim the tops off of the remaining stumps. 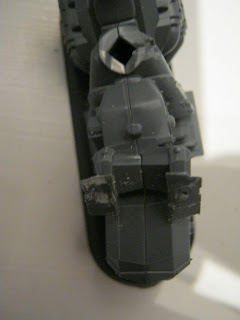 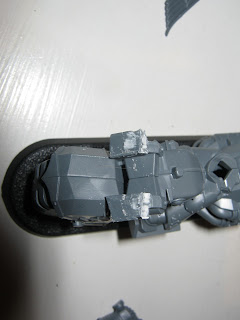 Cut the excess bolter parts off the top/rear of the right side of the bike and remove it completely from the left. Trim the two small struts from in front of the haloed skull motif. 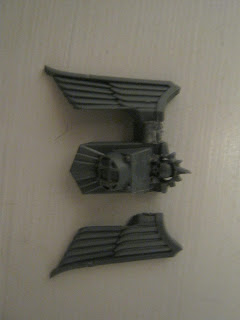 Attach the scout grenade launcher having trimmed the attachment plug part from the bottom of the ammo drum. Place the actual launcher in the stump where the bolter used to be and when everything is in place attach the other fairing, ensuring it lines up correctly. Side by side with the actual ornate launcher it can be seen this is a poor substitute but there are many on bits sites I suspect as you get one with every scout bike. 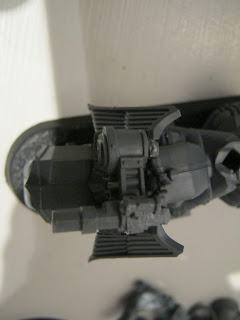 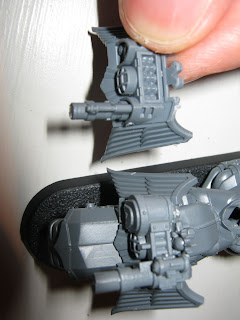 As always I hope this tutorial is useful. It's rather brief and not as detailed as usual so please ask any questions in the comments box and I will try to help. Cheers.
Posted by Jimbo at 21:06