Making the most of spare bitz part 3: Dark Eldar Markers

The final addition to the trilogy is a few dark Eldar markers I made. These can be split into two categories:

1 – Pain tokens. I actually made these prior to buying any DE models and were an idea I had from the start about how I wanted to record squads’ power from pain levels. Very simply, I took 10 bases and pushed a nail through each from beneath. I then gathered up 20 spare heads from various armies and drilled a hole through each at a suitable angle. I then glued one head to each base with the remaining 10 begin able to be added as you please. So, when a unit gets one pain token they get a base added to them. As they accumulate more pain tokens then more heads get added to the spike. I assumed that as not many units can starts with pain tokens and as even 2000pt armies only usually have ~15 kill points (not to mention the inevitable casualties amongst the DE) 20 heads would be more than enough to cover it. Simple and effective. 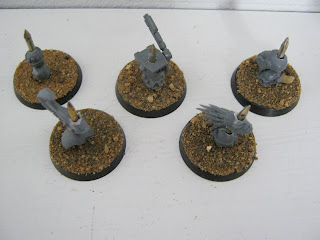 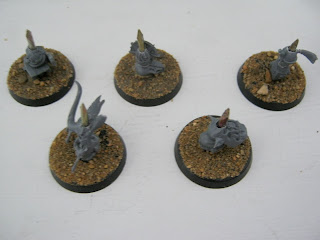 2 – Objective markers. The sheer number of leftover bits from my DE project got me thinking as to how I could use them in order to make some custom objective markers. Here’s what I came up with:

i) Webway portal: Simply 3 matching rudders inverted and glued to a CD lined with cardboard. The 3 smaller vanes are spikes from the raiders, again identical. 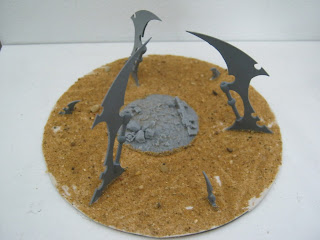 ii) Comm array: 3 matching aethersails drilled into a prow. I wanted to mount it on a larger base but had none available. 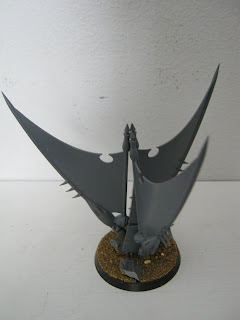 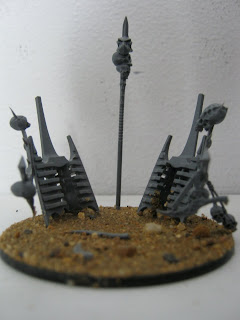 iv) Pile o guns: simply a lot of spare guns and blades from the various kits piled onto a base together. 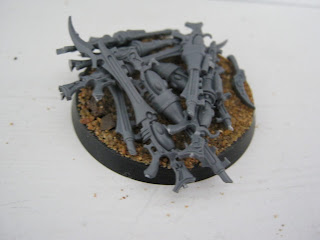 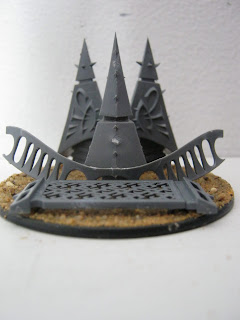 Well that’s it for now. I’m currently getting my Salamanders up to scratch for an upcoming battle and after that will be going back to finish the few remaining Grey Knights needing magnetising and assembly. After a lot of spraying I think I’ll be concentrating more on painting projects for the Summer months, maybe returning to one of my shelved projects (Luna Wolves are a prime candidate) in September. Cheers folks.
Posted by Jimbo at 17:19