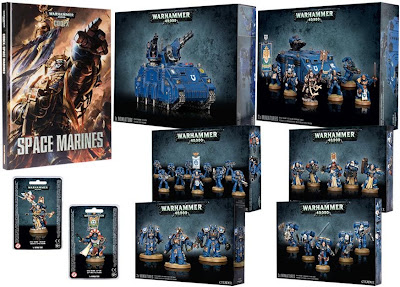 Thought I would write a blurb about my thoughts on the release after a weeks of getting high on plastic glue fumes and marvelling at the new models being added to the armies. (more on that tomorrow). I thought I would break it up into 3 sections for ease of reading. Cheers.

Well, there’s no faulting the book TBH. It’s beautiful from cover to cover. Now that I’ve seen pics of the limited editions I have some pangs of regret at not trying to pick one up, though at the moment financial constraints mean that it’s better to spend that extra £35 on models. Anyway, you get all the cover art except for the successor edition in the book as some consolation and the regular cover, while not quite as nice as the Eldar one IMO, is still superb.

I love the way the layout has been done, with a general intro at the beginning then an in depth look at every first founding chapter and its successors as you go through. Plus a timeline each. It’s gonna take a while to read through all the great sections in this book. I thought the Eldar one was a cut above but this one is easily my favourite. The explanation of the chapter tactics was also handled really well and worded nicely so as to clear up any confusion before it begins.

Then we come to the bestiary, which again is really well thought out, with transports, line tanks and land raiders each having a double page spread plus the nice coloured side profile images of each. A shame the artwork is mostly recoloured from the previous dex though. The grouping theme continues in the photo section with the models arranged by first founding chapter rather than by army list entry, except for the UM part at the beginning which is much larger and gives more of a snapshot of the range available to SMs. The other first founding chapters (plus notable second founding IF successors) get double page spreads which show off notable units instead.

Lastly there are the wargear entries and army lists. The wargear is fairly generic and is hard to make sexy as it’s just blocks of text, though I did note the nice colour armoury was a bit scarce, probably as Dark Angels overlap significantly and there are other places, such as the Salamanders background sections, where wargear can be pictured. The army list again is pretty generic but I liked the Chapter heraldry next to the special characters. Lastly and worth a special mention is that GW have finally trimmed the foldout summary page at the back, meaning it no longer gets creased every time you close the book.

Overall a very strong and decent release. Taking each in turn

Stalker/Hunter – price not unexpected but you do get the added bonus of being able to fully construct the two turrets individually. I very much like the design aesthetics of the model and think it’s a great addition to the SM armoury without going too far off the established track. In fact, the same could be said for the release overall and in fact most 6th ed releases. (OK, the wraithknight was a bit OTT but still)

Tactical squad – perhaps unexpected but overall very welcome. They could easily have charged £30 for this kit and so £25, only marginally more than previous, is still good. And in return there is a net gain in the pieces in the box, what with grav/combi weapons plus sergeant melee weapons and a fair few spare heads/arms etc. The individualised armour pieces and new, not walking but not squatting legs are also great. Plus everything is fully compatible across the range still. Magic.

Vanguard:
Not quite as blinged out as the sternguard in terms of their appearance, the vanguard still have plenty to offer, especially as you get enough weapon arms to outfit 3 times as many marines and enough shoulder pads for twice as many. This allows you to augment existing units or customise a new army from scratch which is great. Mixing and matching this kit with a normal assault squad would also be great for making a varied, 10-man squad of either vanguard or even regular assault marines.

Sternguard:
Possibly the stars of this release, though GW pricing policy does baffle me somewhat. 2 sprues, same as vanguard and 1 less than tactical, yet £30 rather than £25. (plus the centurions are the same sprue size as tactical yet nearly double the price?!) Still, there’s little more one could want in terms of spares for conversions. All those shoulder pads, heavy flamer, combi-weapons etc etc are fantastic. In fact, I’d say for anyone starting a new army just grab a few tactical boxes, a devastator kit and a couple of sternguard kits and have a mega kitbash session for a truly unique looking army. Expensive, but you won’t be disappointed with the kit.

Centurions:
I like the models better in hand than when I saw pics of them that’s for sure. After some modification I’ve grown to accept them and actually am quite fond of the concept now. It’s a shame the models lack that certain something to make them on par with the rest of the release. I think that it’s a practicality thing, in that they don’t look very well designed to do what they’re supposed to do. Pistons and cables hanging off everywhere, massively restricted movement, forward fixed secondary weapons, functionless hands/flippers and nowhere for the pilots arms to go. Just reeks of good idea, poor design philosophy I’m afraid despite the sculptors justifications in WD. Still, not unfixable, although at almost £18 each (same as a character) youd hope they wouldn’t need fixing.

Captain:
Now many people cried that he’s simply a redeco of the AoBR captain, but if you take a close look they have next to nothing in common except a similar pose. I like this chap a lot but don’t think he would look right (helmeted anyway) in many non-UM armies. Plus the combi-grav looks quite integral to the model and thus hard to convert. Another issue is price. Older models include a multi-part plastic captain for £14 and all the 4 chapter masters for £20.50. Newer releases are 4 newer chapter masters for £15 EACH and a mono-pose captain for £18! This is exorbitant and TBH I think I’ve finally reached the stage where GW has priced me out of buying something. Especially when you see the quality of the new FW praetors (£15 each) by comparison. Especially when they come on the same size frame as say the Eldar Farseer, which costs significantly less.

Librarian:
Lovely model with optional psyber cherub rather than head. If I ever pick up one of these 3 characters then it will be the librarian, and the cherub will make a great GK servo-skull counts as. The level of detail, pose and head sculpt are all top notch.

Reclusiam command squad:
The Chaplain has definitely grown on me but there’s no way I’m splashing out £55 just to get him. Maybe he’ll see a separate release further down the line, but unless you actually need the command squad/razorback it just seems too steep a price to pay only to offload much of it on Ebay.

Spray paints:
Can’t help but feel GW are just a little late to the party on this one. Not that they won’t sell well, but for instance in my case had they released these a long time ago I wouldn’t have used army painter for my BA/SW armies instead. I hope they don’t limit these sprays just to the big 4 SM chapters and that in fact we get a good representation of the base paints in spray format.
In conclusion, an excellent release. What would I have liked more? Well, nothing really. I had hoped more in the range would be updated to plastic (namely the thunderfire) but one can hardly complain at how many plastic units there now are across the whole SM range. Plus, this is the first release with no finecast since it’s inception I believe. Interesting times we live in.

Now, on the surface of things I think that although there are a few army builds that stand out (whitescars and Iron hands) as being stronger than the others, this codex doesn’t seem to have any turkeys or autoinclude units that I can see. The points balance seems pretty good internally also, with a few things costed up but the majority of prices dropping or getting reorganised (tactical squads aren’t that much different in price overall, just they can be built a different way). Saying that, some things such as speeders, flyers, rhinos, drop pods etc stayed pretty much the same. I think it’s great that underutilised units such as LoTD, HG and vanguard got the price drop and overutilised ones such as TH/SS termies and sternguard combi-suicide squads got priced up.

The chapter tactics and relics have had a lot of thought go into them and on the surface they provide a great way of players customising their forces (sorry CSM players) into exactly the kind of army they wanted. TBH, I could see Chaos SM getting a new book in 2 years when everything else is updated that’s the same size/complexity of this book to bring it more in line. New plastics for that would be great too! I digress. Chapter tactics are great and I can’t wait to start using them. The whole IG/nid codex thing did little for Robin Cruddaces reputation as a codex writer but I consider him fully redeemed. Good man and thank you.
Posted by Jimbo at 12:00